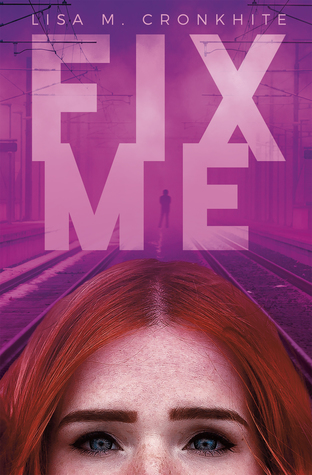 Title: Fix Me
Author: Lisa Cronkhite
Genre: Mystery
Synopsis: (from Goodreads) Penelope Wryter’s life has been a mess ever since her sister committed suicide a year ago. Now Pen’s hooked on Fix, an illegal drug that makes her feel, think, and see differently. The hallucinations are intense, but there’s one vision that keeps Pen coming back for more–Nate. He’s the only person who cares about her. Too bad he’s just a side effect of the drug. Pen knows she’s going nowhere fast. She’s desperate to change. But when she tries to say goodbye to Nate, he professes his love for her making her more confused than ever. Then, when a girl from school goes missing during a bad Fix trip, Pen realizes she may be in a lot more danger than she ever imagined. Unless Pen straightens up and faces reality quick, she might be the next missing girl on the list
Review: Going into this book, I only had the synopsis as a guide for what I was getting into and it sounded promising. I appreciate what this book was, but the writing isn’t my style. It had a good mystery, but the writing was too jumbled. Perhaps the writing was jumbled to mirror a teenager’s brain on Fix? Pen goes through a lot in this book. She’s still dealing with her sister’s suicide, trying to figure out who she is on Fix. She learns that she has to let go of Nate in order to get sober, and she struggles with the threat of another loss. The mystery of local missing teens is woven into Pen’s recovery in an interesting way. The ending felt forced, and the Tabatha sub plot seemed weirdly unconnected in the scheme of things.

*Special thanks to the author for an ARC in exchange for an honest review.