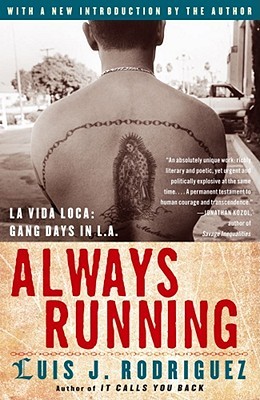 Title: Always Running
Author: Luis Rodriguez
Genre: nonfiction, memoir, crime, urban
Synopsis: (from Goodreads) Always Running is the searing true story of one man’s life in a Chicano gang—and his heroic struggle to free himself from its grip.
By age twelve, Luis Rodriguez was a veteran of East Los Angeles gang warfare. Lured by a seemingly invincible gang culture, he witnessed countless shootings, beatings, and arrests and then watched with increasing fear as gang life claimed friends and family members. Before long, Rodriguez saw a way out of the barrio through education and the power of words and successfully broke free from years of violence and desperation.
At times heartbreakingly sad and brutal, Always Running is ultimately an uplifting true story, filled with hope, insight, and a hard-earned lesson for the next generation.
Review: Always Running has been a book I’ve gone back to over and over again as a story that still needs telling. Every time I read it, I’m surprised and impressed by how Luis Rodriguez can tell such a heartbreaking story so beautifully. In the synopsis they say “at times heartbreakingly sad and brutal” and they aren’t lying. This book is sad, brutal, and graphic. But. Every single word means something in Rodriguez’s story. Every anecdote he relays to the reader is purposeful and compelling. I hate that the things he writes about from his childhood are still relevant — the police brutality, the general attitude toward the “other”, laws and policies that are detrimental to those outside of the majority, those without power. The way Rodriguez writes about gangs and his upbringing is still relevant. I love this book, and I’d recommend it to high schoolers or older without reservation.