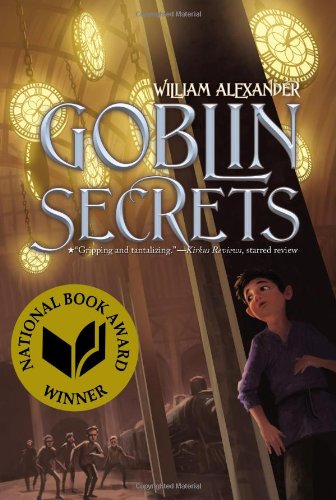 Title: Goblin Secrets
Author: William Alexander
Genre​: YA; fantasy
Synopsis: (from Goodreads) In the town of Zombay, there is a witch named Graba who has clockwork chicken legs and moves her house around—much like the fairy tale figure of Baba Yaga. Graba takes in stray children, and Rownie is the youngest boy in her household. Rownie’s only real relative is his older brother Rowan, who is an actor. But acting is outlawed in Zombay, and Rowan has disappeared. Desperate to find him, Rownie joins up with a troupe of goblins who skirt the law to put on plays. But their plays are not only for entertainment, and the masks they use are for more than make-believe. The goblins also want to find Rowan—because Rowan might be the only person who can save the town from being flooded by a mighty river.
Review: In this day and age, with the book world as oversaturated as it is, finding a fantasy book that has magic, a hero’s quest, and a prophecy is almost commonplace – but that’s not what you’ll get in William Alexander’s Goblin Secrets. This book has familiar elements from all of those tropes but in Zombay, even with the threat of a prophesized flood, nothing is as it seems. The main character, Rownie, is a little boy who doesn’t even have his own name, and yet, he is plucky and tough. It is easy to see why this book received a National Book Award as William Alexander’s quality of writing, narrative style, and structure is easy to follow and his characters are both charming and brave. In the city of Zombay, Tamlin (the politically correct term for goblins) believe in hope and magic and prophecy, and need Rownie’s help to make it come to pass. They accept Rownie as one of their own and tell him to “Stand and move with purpose. Move the way the mask would prefer you move” (103) because what they do for Zombay is mysterious… something “ancient and grand” (101).

​This book, originally written for middle grade readers, is full of steampunk, action, and questing for them to enjoy. Rownie, an orphan running from the witch that is his caregiver, Graba, is looking for his missing brother throughout the town of Zombay. Rownie, while on the run from Graba, comes upon a band of goblins (Tamlin) whose home, despite their social status, is Zombay. Born and raised in Zombay, but changed – the term used for people who become goblins – are not seen as real citizens even in their hometown. In this, Alexander does something clever – he introduces social commentary into the novel without seeming to be on a soapbox. He does this in little ways, for instance he writes, “UnChanged folk do not touch Tamlin, as a rule. They seem to believe that it would give them freckles” (106). Without being political, Alexander introduces inequity and discrimination into a novel meant for preteens.

The story is told from a 3rd person point of view which allows the reader to enter Rownie’s mind throughout the book. Alexander writes in the main character’s emotions and thoughts in a way that lends itself to its readership. Rownie “does not run” (60) from his problems – although he does run from the Guard – but instead, faces them as a hero who is on a quest must. Alexander’s style posits for strong truths and deeper meanings into the hero’s quest. Semele, the Tamlin who takes Rownie in, says, “We are always using masks and a lack of facts to find the truth and nudge it into becoming more true” (95). In a city full of liars, Rownie realizes that actors, who “pretend” because “It’s kind of [their] job” (95) are the only ones who can help him find his brother and save Zombay from the prophesized floods. into Rownie’s journey with simple, yet beautiful prose. It isn’t Graba or his brother who “gather beside Rownie” (219) throughout this journey through the flood and back, it’s the Tamlin. Alexander’s book, written in Acts and Scenes, like the drama it is, is a journey for the truth. Rownie, an orphan and a misfit, goes on a quest for his brother, but ends up finding out what he’s truly made of in the process.