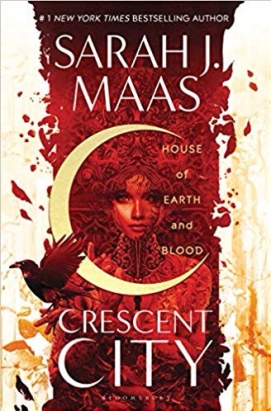 Title: House of Earth and Blood (Crescent City #1)
Author: Sarah J Maas
Genre: fantasy; new adult; adult; romance; mystery; series
Synopsis: (from Goodreads) Bryce Quinlan had the perfect life—working hard all day and partying all night—until a demon murdered her closest friends, leaving her bereft, wounded, and alone. When the accused is behind bars but the crimes start up again, Bryce finds herself at the heart of the investigation. She’ll do whatever it takes to avenge their deaths.

Hunt Athalar is a notorious Fallen angel, now enslaved to the Archangels he once attempted to overthrow. His brutal skills and incredible strength have been set to one purpose—to assassinate his boss’s enemies, no questions asked. But with a demon wreaking havoc in the city, he’s offered an irresistible deal: help Bryce find the murderer, and his freedom will be within reach.

As Bryce and Hunt dig deep into Crescent City’s underbelly, they discover a dark power that threatens everything and everyone they hold dear, and they find, in each other, a blazing passion—one that could set them both free, if they’d only let it.

Like many others, I preordered this book and waited with bated breath. Then tore into it the moment it arrived. And then. I wasn’t dazzled? Like, it took over 100 pages for me to get into it and even then, the only reason I kept reading at all was because it was an SJM book. Here’s the good news— it got better over time!

While I never truly fell in love with any of her characters (maybe a few side characters) I did really enjoy the plot by the middle. I loved the bare bones of it: a murder mystery whodunit. I liked that SJM gave us little pieces that kept coming back up throughout the book (Bryce going to the Istros and seeing something creepy, Danika and Bryce getting caught up in something scary when Danika says she loves Bryce, Hunt’s backstory with Shahar, Jesiba’s whole character in general, Fury) that kept the plot moving.

There were a few plot twists that I definitely expected:

But I found that I didn’t care too much that I saw them coming because it kept the story going, just like the little clues. It was well done.

I really liked the world building in this book. SJM wrote unique and distinct subsets of Lunathion and it was brilliant.  SJM’s writing style changed depending on where we were in Crescent City. I really loved that. My heart raced when they were in the Meat Market. Sentences seemed shorter. When Bryce and Hunt were at the shooting range, there was a carefree feel to the writing that made me feel like the characters.  The energy and time put into this element of the book is clear. Moonwood, FiRo, the Gallery — each territory is its own space, and it’s so wonderfully done.

Another thing I love about SJM is how she goes about creating a new mythos in each book series. It’s clear she’s setting her readers up for a new series too. Before even jumping into the book, readers are given a preview on the “Houses of Midgard” so we’re aware that we’ll be diving right in. At the very bottom of this page, it says, “Sprites were kicked out of their House as a result of their participation in the Fall, and are now considered Lowers, though many of them refuse to accept this.” This preview lets us all know that we’re in for something bigger, but I for one, didn’t expect the amount of the Fall storyline that we got in this book too.

Overall, in terms of worldbuilding, I felt like I was thrown into the deep end — (literally every mythical beast will appear, any animal can be a shifter — can we talk about the magpie shifter at the market? omggg — every scary creature you’ve ever heard of is in there too, and angels, fae, and mermaids will be in here also) but I knew how to swim, so… I dealt with it.

That being said, her characters were not fun. Like. From Bryce to Hunt to all of them, it was tough to care about literally any of them. I get that SJM wanted to write an adult fantasy book but having her main heroine be the jaded party girl was not easy to read. I think I understood the intention — hide who you truly are and watch people show you their true colors — right?  But in my opinion, that went on too long. Bryce’s grief was palpable and parts of that felt so real and so raw, and I truly go that. Those pages were tense and hard to read for the right reasons. But so much of Bryce was hard to read for the wrong reasons.

And don’t get me started on Hunt. With his brooding “tortured soul” thing? It was just really rough to read for SO MANY pages.

Bryce is very anti- alphahole the whole book, but then, on a DIME, she turns around and attempts to give up everything for Hunt. Her entire character is built on this idea of not giving up herself for a man, and then she sells herself to Jesiba for him? Tries to sell herself to Sandriel for him? After everything he did to her — it’s like antithetical to her character. I still don’t understand it as a plot point.

Some of the other characters were also like… kind of like character cliché shells to me. Like Ruhn, Bryce’s overbearing-yet-essential-skill-having parents, the friends who just give up on her when everything with Danika goes down.

It was almost like the plot took all of SJM’s attention and then she just pulled character cards that she started working on but hadn’t finished yet. It’s almost like she plans on filling out the character traits in the subsequent books in the series.

At the end of the day, I still:

and will still buy the next one.